You Knew Me When 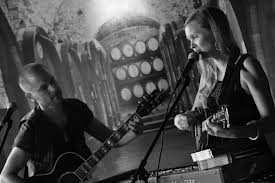 The magic that a young couple captures when in love is bottled and put on display for us to enjoy. If ” You knew me when” continues their path, everyone who knows them will be saying “I knew,You knew me when, before everyone knew, you knew me when.

You Knew Me When…a phrase we can all relate to, and one that speaks to the devotedness of the Music City based duo to their art, their history, and their continued musical progression. After uprooting from their Nashville home and full-time jobs in June of 2012, You Knew Me When set plans to tour the nation for a full year. Since that time they have continued to tour fulltime, playing shows coast to coast throughout the USA and into Canada, and released their sophomore album “You, Me, and the Rest of the World”. Continuing to evolve in their musical bond since the release of their self-titled debut album in late 2010, “You, Me, and the Rest of the World” is the next progression in the musical journey of You Knew Me When and is now available via www.youknewmewhen.com, iTunes, and other online retailers.

The music of You Knew Me When parades between a fusion of progressive indie-rock and folky compositions all infused with a myriad of pulsing and stirring beats. Muen Magazine stated, “Their music offers haunting, brooding, yet somehow angelic vocal arrangements along with a wall of sound in their musicianship. The ambiance they offer is second to none.” While blending their vocals, Karisa, who until recently served as a Nashville public school music teacher, provides the piano, ukulele, and glockenspiel, as Cie, who spent several years as the Global Events Production Manager for Gibson Guitar, supplies the guitar and rhythmic nuances. The cumulative result is a musical style that blends a singer-songwriter soul with a pop/rock mentality.

Although music was the calling that brought them together in Nashville, Tennessee, it took the husband and wife duo You Knew Me When nearly a decade to create music together as a united pair. Stemming from the separate musical backgrounds of Cie Hoover, who predominantly resided within the hard-rock scene, and Karisa Hoover, who could be found more often in vocal seminars and music education workshops, the two began writing music together in mid 2009. It was from that point on that the two began melding their life partnership into the musical partnership known as You Knew Me When.

You Knew Me When released their debut self-titled album in December of 2010. A true DIY effort, every facet of the album was written, recorded and nurtured by the pair in their Nashville home studio. The eleven songs on this album would prove to be the catalyst for the years and the road(s) ahead.