CALLIE KHOURI is our Southern Belle of the week. She has created, as a writer  the characters and roles that typlify the strong  traits of a genuine southern belle. We don’t know if Callie would consider herself a Southern Belle, but we certainly do. To have the enduring skill and ability to maintain her level of quality within the  world of crafting story, characters, and plot of southern characters. She is under rated. We love Callie Khouri.

Callie Khouri, the Oscar-winning screenwriter of “Thelma and Louise” and the director of “The Divine Secrets of the Ya-Ya Sisterhood,” is responsible for one of the best, and certainly the most musical, new shows of the fall season: ABC’s delightful, grounded soap opera “Nashville.”    http://abc.go.com/shows/nashville

The show stars Connie Britton as Rayna Jaymes, an aging country music star embroiled in a love quadrangle, career trouble and a rivalry with a conniving, jealous younger musician played by Hayden Panettiere. It features original songs by the likes of Elvis Costello and Lucinda Williams. (T Bone Burnett, who is Khouri’s husband, is the show’s executive music producer.)

With the series heading into its third week, Khouri spoke with me about how the show came to be, her disinterest in catfights and how much easier it is these days to make TV for women than it is to make films for women.

How did “Nashville” come about?

Well, the idea came from a shotgun wedding — well, wedding’s not exactly the right word, but my agency, CAA, signed the company who own the Grand Ol’ Opry. So I went to CAA for this meeting, which I had been trying to get out of for quite a while because I was like, “I don’t know what to do about the Grand Ol’ Opry.” So I meet this guy in the lobby,R.J. Cutler, and he introduces himself, and I’m thinking, “gosh he’s awful friendly.” I had no idea who he was until I go to the meeting and he goes with me. And it turns out, they also wanted him to do something about Nashville. So I just started talking about my time in Nashville, when I lived here. And I’ve been coming here since I was a little kid because my aunt and uncle lived here and my cousins. And after college I moved here because I kind of didn’t know what I wanted to do. I had been a theater major, and I thought, “You know what, this is stupid. I’m really going to be in theater? Really? No. I have to go to some place and live as a normal person.” So I thought Nashville would be a good place to start, for me. That was the next biggest city I thought I could move to because I had been brought up in a small town and had gone to college in a small town. [Laughing.] Nashville seemed like a good gateway city to big-city life. And I was just such an incredible music lover — I almost said freak, but that’s not quite right. But when I moved here I just immersed myself in listening to live music. I found all kinds of music, really, except country music. You had to really kind of dig, at the time, because all the country music went on in sessions, in the studio. But the level of songwriting and musicianship is so deep in this town it just blew my mind. I’m not musical myself. I don’t play any instruments, I don’t sing, and it was just one of the most incredibly frustrating experiences in the world being around all of this and not being able to do anything about it. So I ended up moving to L.A.

Did you say you wanted to make a show about women in Nashville?

I didn’t say I wanted to make a show at all. I said, this is what it was like when I lived there. I really didn’t want to make a show. I mean I did, I did, but it wasn’t like I was driving this thing. It was kind of like I went to this meeting and someone said, “here, hold this,” and it was a bullet train leaving the station. I just like held on for dear life — although that’s an overly dramatic characterization of thousands of hours of thankless work. It was the perfect marriage of all the things I care about.

Which are: women’s places in this world and business, and these very high-pressure careers, and certainly just the world of music, making music and putting it out there. I absolutely love that. I’m kind of around it all the time; through my husband and everything, I get to hear a lot of great stuff, so it just seemed like a natural fit.

Had you been wanting to do a TV show?

You know, I’ve toyed around with it. I’d written one pilot that didn’t get picked up several years ago. And I have to say I was a little bit relieved because at the time I don’t think I was really ready. Then I pitched another pilot. Fox got the script but it didn’t get picked up, it didn’t even get shot. And then this. And by the time it was this, I’m just liking TV so much more than features right now, just in terms of what you can get made. For me, the movies I like are all independent. And getting an independent feature made, it’s like you get down to the selling organs part, and it just loses some of its luster.

You’re like, “Here’s my kidney, but I don’t know if I want to make it that badly.”

Because you’re allowed. You’re allowed to make things for women on television and there’s not like … you don’t have to go through the humiliation of having made something directed at women. There it’s just accepted, whereas if it’s a feature, it’s like “So, talk to me about chick flicks.” It’s like … I don’t think you want to hear my opinion about this.

I want to hear your opinion! Even though it’s probably not very nice.

No, it’s not. I just think it’s insulting that if there is something with women in it, it’s relegated to this kind of trash heap. It doesn’t matter what it is, how good it is, if there is emotion in it, it’s immediately going to be talked down to. And I’m obviously irritated by that. Probably all women are. Certainly a lot of women filmmakers are.

Whereas network TV, and ABC in particular, is often aimed at women. That’s who their audience is.

I mean, again, it’s like, works for me. I want to make something that’s respectful, and respected. And I think you can make something for women that is respected on television. Anyway, I don’t want to just complain about features, but it does seem unduly hard given the number of women that exist in the world. 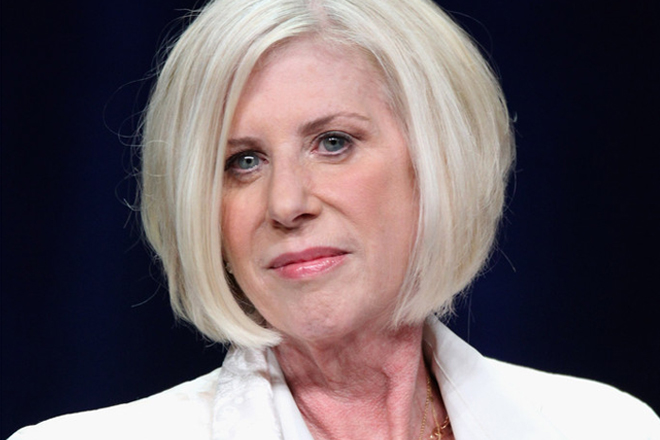